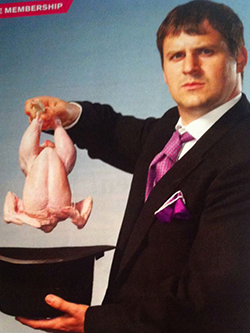 This month I was lucky enough to be invited over to the world Famous Magic Castle in Los Angeles to perform for a week. It’s a real honour to have been invited over, and I was lucky enough to spend the week with fellow magicians Paul Wilson (from the BBC show “The Real Hustle”) and John Archer (the magician who just fooled Penn and Teller on ITV show ‘Fool Us’. Was an amazing week, the crowds were awesome and I hope to have the video footage on line really soon.

Less than 24 hours on getting back to the UK, I had a very fun evening event with Lloyds HBOS. Came back form LA totally buzzing and had a great evening! One of the guys at the event booked me to perform at his wedding there and then.

Very busy month, got to see Norwich again at 3rd year of performing at their annual media event, was in London, Glasgow, Edinburgh and Newcastle also. Not to mention Blackpool for the famous Magician’s Conference.

Saw some of the most amazing magicians in the world this year, because of the European Championships. This was my first time at a convention under the guise of Edinburgh International Magic Festival Artistic Director. Much of the fun and games was dispensed with and most of my time was spent on business; networking and seeing shows. The good news is that I have been able to convince some of the very top name acts to come to Edinburgh for the Magic Festival this year. Check out MagicFest for more info.

Absolute highlight of March was having the pleasure of working alongside top Scottish comedian Kevin Bridges. Kevin is a great guy and a very, very funny chap. There’s not many folks who can compare the cost increase of a ‘chomp’ from 10p to 12p in terms of the UK recession and the ‘current economic climate’. Absolutely hilarious! Really look forward to working with him again in the future. If you haven’t seen Kevin perform, check out this youtube clip. Kevin Bridges on YouTube

9th May 2011 was the 100th year anniversary of the death of world famous illusionist The Great Lafayette. The Festival Theatre in Edinburgh decided to honour his death by having a weekend of events inside the theatre. MagicFest was heavily involved. As well as arranging shows from Lewis Barlow and Gary James, I also performed 2 sell out shows in the theatre. Paul Daniels even popped his head in to say hello. This was the first time we had been face to face since the filming of Faking It back in 2004. Since Paul was in town performing at the Festival Theatre that weeekend we decided that it would be a good idea to launch the MagicFest programme. This worked out really well. The launch was well attended by press and our live video link up to Paul Wilson from the BBC show “Real Hustle” went without a hitch. Thanks to all who came along and supported MagicFest.

I’m delighted to say that on the 1st June I proposed to my Fiance and she agreed to Marry me! Needless to say, I proposed using magic. It may seem a bit corny, but it’s who I am and to have done it a different way wouldn’t have been me!

The month before MagicFest is always a hectic one but I am really grateful that I am busy in a job that I love doing. This month I had three footballers weddings on the cards. Craig Beattie, formerly of Glasgow Celtic, Kevin Thompson, formerly of Hibs, Rangers and now at Middlesbrough and Alan Hutton of Spurs. Lots of fun. One of the great parts of my job is spending time with people at very special moments in their life. I’m very proud that people trust me to perform to their closest family and friends.

Wow, what an amazing start to the month. Over 5000 people came to see MagicFest this year. We’re delighted that people came out in such high numbers to see live, quality magic. I’m very proud of the MagicFest team and performers that entertained some very enthusiastic audiences from 1-8 July this month. The dates for the Edinburgh International Magic Festival have now been announced. To see what all the fuss is about have a look at the promo video below from this year.

This month I was interviewed by ‘Equity Magazine’ last month. This is an insider magazine for performers across the world. It was a real honour for Kevin to be asked to be a part of this prestigious publication.